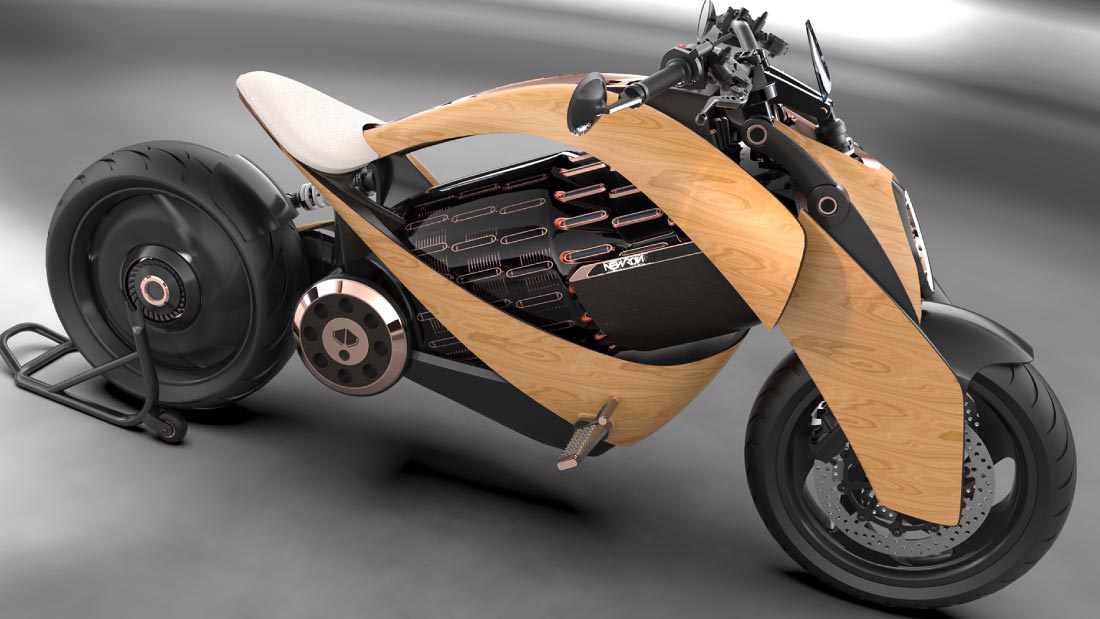 Newron Motors plans to produce in France a high-end and high-performance electric motorcycle. As part of our innovation activities, we have established a technical partnership with this ambitious start-up.

The origin of the Newron Motors project

At the end of his adolescence, Sébastien Mahut, a motorcycle enthusiast, dreamt of designing an all-electric one. A motorcycle of modern times, reliable, propelled by clean and silent energy. From an existing machine, an Aprilia Futura (!), he designed in his garage the first prototype. After 1 year of work, he presented to the public a machine capable of accelerating up to 110 km / h and enjoying a range of about 60 km. The vehicle was not homologated because it no longer corresponded to the car registration document, but the bet was successful. A small detail: Sébastien then needed to think about getting his motorcycle license…

Caught up by the realities of life

Sébastien finished his studies at Polytech Paris Sud. After a work-study program at Safran, he was officially hired in 2009 at Sagem Défense Sécurité, as an electronic engineer. In 2014, he met Michel Sérafin. The two engineers began to build “castles in the air”, and the rest of the project took shape. They developed the first technical prototype in an incubator called Usine IO, then a second one.”From the scribbled project through several informal meetings, we built the structure of our fledgling project and gave it a first landing place in an incubator for two and a half years. We left our jobs and made the bet to give birth to this project” tells Michel. This adventure became for them a full-time project.

Newron Motors was officially founded at the end of 2016. In 2017, they integrated the hardware program “FOCUS by Usine IO”, which allowed them to join the famous Station F start-up campus, where they met the design teams of Dassault Systèmes. With them, they set goals and workshops that allowed them to guide the product design. In a second step, within the mobility division of Dassault, they were advised by a team of engineers to develop the technical parts of the bike.

Newron Motors aims to launch a limited edition of 12 road-certified models in 2020 before moving to larger scale commercialization in 2021. At the same time, the team launched a major dynamic testing campaign. It is in this context that it begins its collaboration with us.

The partnership with the ADVANS Group

“We have fully entered the era of electric vehicles, with the goal of reducing greenhouse gas emissions, energy dependency and improving urban air quality” says Frédéric Onado, the R&D and Innovation Director for the ADVANS Group. “Newron Motors offers an answer to these challenges while maintaining an uncompromising user experience with a bike proposing a strong image and character. It is a great project, and we are passionate about the associated technological stakes (electronics, embedded software, the communication interface, AI) inside the ADVANS Group.”

As part of this partnership, we have begun to work on designing a test bench from our ELSYS Design technical center in Cachan. In a second step, we have planned to extend our collaboration to the control and communication interface parts.

The name Newron is actually the contraction of Newton, which serves to establish a value of torque (the acceleration felt), and neuron, which refers to artificial intelligence. Newron Motors is indeed aiming to design a learning motorcycle, which will know how to adapt its consumption and predict the optimal itinerary according to the recorded use. In addition, this motorbike will be connected, and accessible to the driver from an iOS and Android smartphone application, which will allow for example to perform predictive maintenance. All these topics for which AViSTO has strong expertise.

“As Peter Drucker says, ‘The best way to predict the future is to create it,'” says Sebastien Mahut, Newron Motors’ technical director. “To pursue our dream, we need to surround ourselves with leading technical and technological partners. After Dassault Systèmes, we are proud to start a collaboration with the ADVANS Group.”